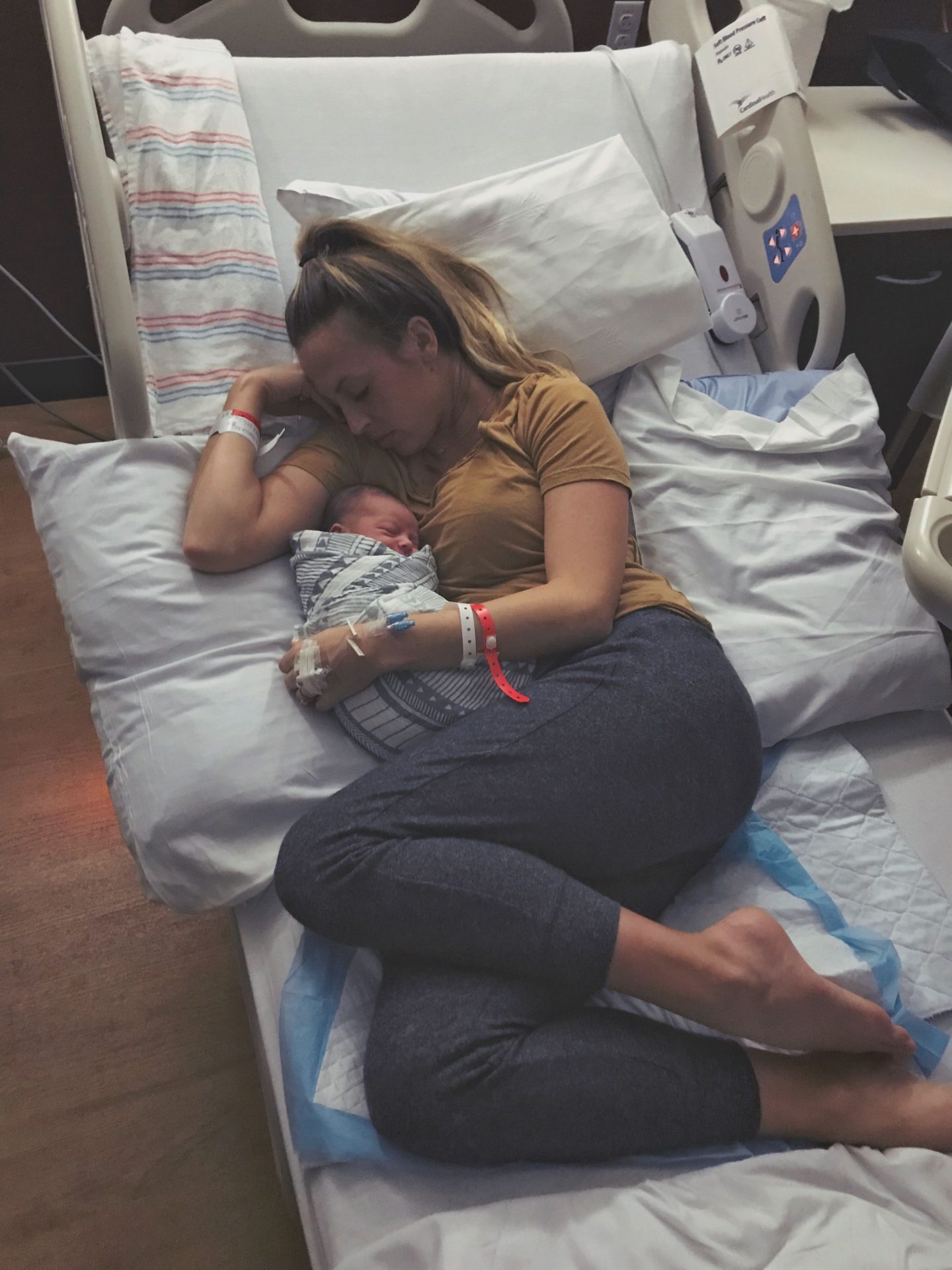 Okay so I totally struggled with what to title this post because we aren’t exactly on a “schedule” yet,
more like a night time routine that happens often, but not always lol

We are officially parents of an ALMOST 1 month old… WHAT?!? So crazy to me.
Our pediatrician told us at our last appointment that there’s really no reason to try and get Hayes on a strict schedule yet, he’s still so little and is kind of going to be doing what he wants when he wants, so right now I just nurse him when he’s hungry, and let him sleep when he’s sleeping.
However, I have been trying to keep him awake a little more during the day time so that he understands day from night a little better!

Alright, here we go…
As a new mama it is SO hard to start a schedule… you’re in survival mode, you’re exhausted,
and honestly, the last thing you want is to be following a timeline or a schedule…
So, unlike most people, I’ve been pretty chill about the whole schedule thing.
Will I regret this later? maybe? maybe not? Who knows.
But this is what’s been working for us right now!!

So we currently bathe Hayes twice a week, we’ve designated Tuesdays and Fridays as our bath days!
Newborns have super sensitive skin and they really don’t get dirty, so if you bathe them
too often it can cause their skin to majorly dry out and start peeling.
Kyle gets home from work around 5:30/6 and we typically go on a little family walk.
On Tuesdays and Fridays (bath nights) we try to give Hayes his bath around 7:30!
After his bath we put coconut oil all over his little body as a lotion/moisturizer,
and then we “prep the house” for bed – This step is SUPER important.
My sweet friend Jamie filled me in on this and I’m SO thankful she did….
So babies are VERY easily overstimulated.
So at night time, we make sure to dim all the lights in the house, make sure the TV isn’t too loud and keep things as calm and “night time” like as possible.

So in order for me to get a couple hours of uninterrupted sleep, I nurse Hayes and go to bed around 8 or 9.
Kyle stays up with him and they hang out in the living room and if he happens to get hungry again Kyle will give him a bottle of my breastmilk so I can rest.
At first I was really nervous to give Hayes a bottle, I was so worried that giving him a bottle would make him not want to breastfeed, BUT after a week of pretty much NO sleep whatsoever, you’ll do anything lol
And good news, he still prefers his mama!

So when I go to bed around 8 or 9, this is when my “main sleep” happens. I know Hayes is being cared for by his daddy and I don’t have to feed him anytime soon since he’ll be getting a bottle and I can finally relax.
This sleep stretch can be anywhere from 1-4 hours.
Those 4 hour nights are extremely rare but goodness they’re incredible and make me feel like I can conquer the world! Those 1 hour nights are TOUGH and are when Hayes is cluster feeding or can only be soothed by his mama.

Around 11 or 12 they’ll both come to bed and Hayes is typically ready to eat again,
so i’ll nurse him, change his diaper and then mama night shift begins!
Every night is different, Hayes typically wakes up about every 2 hours to eat, and I’ll feed him, burp him and change him.
Occasionally he’ll want to eat every hour and those nights are longggggg and tough, life with a newborn is just really unpredictable!
I stay in bed when I nurse him and Kyle is usually able to sleep through it, which is good!

I’m sure I’ll get some questions about this so I’ll go ahead and answer!!
Yes, Hayes sleeps in bed with us and No, I never thought/planned we would be co sleeping.
He sleeps right in between us in his Dock A Tot and I love having him close by, for right now.
He’s still my tiny little newborn and I totally get separation anxiety when I can’t see or hear him.
Although I LOVE having Hayes right next to me, Kyle and I are definitely missing going to bed together and sleeping next to each other, so I’m not sure how long this “routine” and co sleeping thing are going to last.
BUT for right now, it’s what works for us!

I also want to share a few things that I think really help Hayes sleep at night!
Kyle and I have always had the TV on at night when we fall asleep but ladies and gentlemen,
that is now a thing of the past.
I started to notice pretty quickly that the flashing lights from the TV were keeping Hayes awake
and it was amazing how quickly he would settle down once the TV was off!
Another thing that I think is a total miracle worker is “shushing”,
I’m pretty sure they make actual devices that do this but we use Kyle’s work phone and just
youtube “8-10 hours of baby shushing” and it really does soothe Hayes, and honestly it soothes us too! lol

I always have a pacifier close by as well, sometimes Hayes will take it and sometimes he won’t,
but those nights that he does take it, it’s a life saver!
We’ve also been using some Essential Oils for bed time, diffusing and also applying to Hayes’s little feet.
Let me know if y’all are interested in knowing more about which oils we’ve been using.

I know a lot of you were hoping for some kind of routine or daily schedule post,
but that’s just not our reality right now. I hope this was at least somewhat helpful though!!
To all you mamas reading this, IT’S ALMOST THE WEEKEND!!!!!