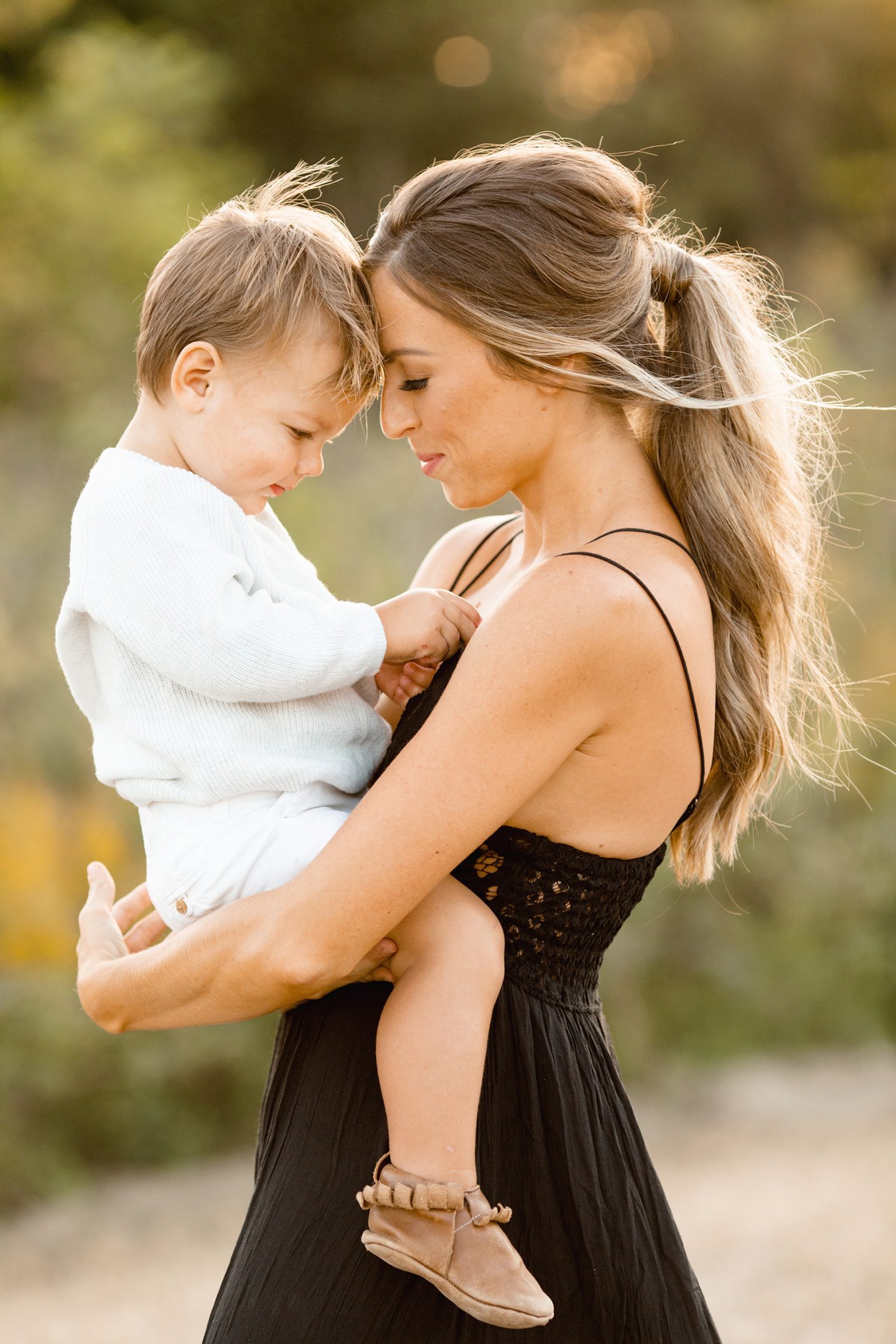 It’s freaking HARD when Gods plan and timeline of your life looks completely different than what you wanted or hoped for. I’ve been having to remind myself a lot lately that it’s okay to feel frustrated or sad or angry about it. But also constantly trying to remember that His plans for our family will ALWAYS be greater than mine…ALWAYS. And that just because our babies will be further apart in age than I would’ve liked doesn’t mean they can’t still be super close and the best of friends. That’s been one of the hardest parts for me in trying for baby #2…I really really pictured it happening way sooner, I just KNEW we’d have 2 under 2 and it would be complete chaos but so perfect at the same time. I’ve always wanted a big close knit family, and for some reason it’s stuck in my head that if I don’t pop the babies all out back to back that they won’t be close…which I KNOW is so silly, but I can’t help but think that way.

I remember when we were trying for Hayes, I was SO excited to tell people that we were “trying” and I remember quite a few people telling me how excited they were for us but they weren’t quite ready to try yet…and I remember a lot of those same people getting pregnant, and having babies, and more babies before I was even pregnant with Hayes. That was HARD. Was I SO happy for them?? Hell yes!! But did it also remind me, “Hey, you’re still not pregnant and you started trying way before they were even thinking about trying and now they’re holding their precious baby in their arms!”?! Hell yes!

A lot of you have asked me to share more about trying for baby #2. It’s had it’s ups and downs. I’m mostly positive, but I definitely have days or moments where I just feel completely sad or defeated or forgotten or afraid of another 2+ year journey or just no journey at all. I think I’ve been scared to share about it because I DO NOT want anyone feeling sorry for us or thinking I’m asking for pitty. I am SO well aware of so many who are facing much more serious issues or who have even lost children. My hope is that one of you can resonate with my story and feel understood, I am in no way trying to act like I have a rough life or that I’m not thankful for what I’ve been given. I know the majority of you know this, it just makes me feel better to have it written out in case there’s that ONE person who reads this and takes away something negative from it.

Last year in September we were on our first BIG family vacation with Hayes, in Hawaii. He was around 7 months old and I remember always thinking “THIS, this is my favorite age so far” but Kyle and I tended to say that every month! haha We always had this plan that we would start trying for baby #2 as soon as Hayes was 9 months old, that way our babies would be 18 months apart and super close…the best of friends ya know?! I was going to start this post by saying it was around a year ago today that we started trying for baby #2, but there were a few months before that we had some “oopsies” and I remember hoping and praying “PLEASE Lord let it happen just by accident this time”. I think the hardest part for me this time around is just the fear of the next month, I find myself constantly saying “Okay, it didn’t happen this month but that’s okay…surely next month!” and then next month comes along and it’s the same story…Every single month since last November I have honestly had really high hopes and been pretty positive. I’m pretty sure I was CONVINCED that I was pregnant at least 10 out of the 13+ months we’ve been trying, like so convinced that I videoed while the test showed the result and the entire day before I was planning exactly how I was going to surprise Kyle.

I’m pretty sure most of you know this, but we tried for around two years with Hayes, I was basically told I have “unexplained infertility”, and I set up an appointment to go get everything checked out…a week before my appointment I got my first ever positive pregnancy test and it was absolutely INSANE..that after two years, not changing a single thing, I just all the sudden got pregnant. It was nuts, it didn’t make sense, but it happened and we have the most beautiful baby boy because of it.

I remember after having Hayes, everyone would always tell me, “Oh, you’ll get pregnant super quick the next time around! That always happens to people that struggled getting pregnant with the first!! The 2nd one just happens right away!” I know that does happen for a lot of people! I especially hear that happening when people choose to adopt, they find out they’re pregnant soon after! As much as I really did enjoy hearing that and thinking positive I definitely didn’t want to get my hopes up, and I was still prepared for it to take “a little while”. For all you enneagram lovers, I’m pretty sure I’m a 6, so I definitely tend to prepare for the worst, It’s a way of protecting myself. Needless to say, I was fully prepared for it to not happen right away.

Since I already had a baby I didn’t know what an appropriate time would be to go to the doctor or “worry”. I still didn’t have answers as to why it took so long to get pregnant with Hayes but I never want to just run to the doctor and be “that patient” when things don’t go my way…I don’t know if that even makes sense but hopefully y’all understand what I’m saying. lol

We had been REALLY trying for almost a year so I said screw it, I’m making an appointment…I went to see my doctor, who I absolutely love and trust! He assured me that he really thinks I’m fine, I’m young and im healthy and he said “You’re going to hate hearing this…but I really think it’s just bad luck that it hasn’t happened yet” I did hate that.

He said that we should do some tests and check my tubes just in case something might be in the way or blocking my tubes and preventing me from getting pregnant. So I went in a week or so later to get that procedure..sure enough my uterus and cervix were completely covered with polyps. There was NO way I was going to get pregnant with those polyps in there and he said if I did happen to get pregnant it would 100% end in miscarriage. So we scheduled a surgery to get them out ASAP. I remember being SO excited about the surgery, I had FINALLY found out what was wrong, I was FINALLY going to be able to get pregnant like a normal person!!!! He told me that my period should come back normal and we could start trying right away. I had the surgery, period came a few days later, and I was freaking PUMPED haha I actually shared about my surgery on instagram stories and it was insane how many of you messaged me saying you or your friend had the same exact surgery and ended up getting pregnant the next month!! I can’t even tell y’all how excited and anxious those messages got me. Those two weeks after trying were the lonnngggeeesstttt two weeks of my life. I actually thought I was pregnant. Like I was SURE of it. My boobs were hurting from the water pressure in the shower, I was cramping but they didn’t feel like period cramps etc…and my period was even two days late. BUT sure enough my period came and I took probably 10 pregnancy tests all throughout that week and they were all negative. I was REALLY mad. I was super frustrated with God. I remember before I started my period I just kept praying throughout the day “Please Lord, if I’m going to start my period just let it start now so I can stop getting my hopes up” I think I repeated that prayer 600 times. My period is never ever ever late. So when it showed up 2 days late I was just DONE and so frustrated.

I’m okay though!! Seeing that negative test is always difficult no matter how long you’ve been trying. I know that God has a plan for us. I know that whatever His plan is, that it’s perfect. So as of now, it’s all up to Him. I could get pregnant this month, I could get pregnant in two years, or it could be 5 years… and I need to be okay with that.  I’m trying to just accept the fact that I am not in control and HE is. Also reminding myself that He brought us Hayes at the most perfect timing and He can do that again with our next baby, even if it seems like (to me) that the perfect timing was a long time ago. So that’s kind of where I’m at! I think my biggest fear right now is that we’ll continue to get negative tests, which means the polyps weren’t the only issue. Once they found the polyps it was like Christmas morning because I finally knew what the problem was and it was fixable!!! (thank you Jesus) but of course there could be other underlying issue that we don’t know about which is really scary. I have moments of being totally okay and at peace with everything and then I have moments of being sad. I think that just comes with being a human though.

Thank you ALL so so much for thinking of me and us and for your prayers. Hopefully baby #2 will happen for us sooner rather than later. In the meantime i’ll be soaking as much one on one time with Hayes as possible, he’s already growing way too fast and I know things will change SO much once we do get pregnant with baby #2. From the messages I’ve received within the last few years, I know there are so many of you who are in the same boat as me or dealing with similar struggles. I also have a good amount of close friends and family members that are going through similar situations or way more difficult situations and it’s just H A R D, I can’t even pretend like I know what you all may be going through because everyones story is different.
All of our stories are unique but we’re all in this together!

Love y’all & your huge hearts, thanks for always loving so much on my little family.